If you feel like relaxing in the middle of a big city, Berlin is the right place for you. Germany’s capital has many beautiful green spaces to offer, which invite you to escape from the stress of everyday life – even amidst the hustle and bustle and not so far from GLINT. In this article you will learn more about the most beautiful parks in Berlin-Mitte.

Tiergarten – A Park Ready To Be Discovered

The most famous park in Berlin is undoubtedly the Große Tiergarten. Spread over 210 hectares, it forms the city’s green lung and is even larger than London’s Hyde Park. Not too far from Brandenburg Gate and Potsdamer Platz, Tiergarten is the perfect place to stroll, sunbathe and picnic. Additionally, there is also a lot to discover here: Tiergarten is home to the fourth largest freestanding carillon in the world. The 68 bells of the 42-metre-high tower ring daily at 12 noon and 4 p.m. in summer. Concerts also take place here on certain Sundays.

Also worth a visit is the Open Air Gas Lantern Museum. Almost 100 gas lanterns from different eras shine in the western end of the park after dark. During the day you should stop by the Global Stone Project. The huge, polished rocks are a peace project by the artist Wolfgang Kraker von Schwarzenfeld. Each stone on display comes from a different country and has a similarly worked sister stone. If you would like to refuel afterwards, visit the famous tea house nearby, which offers a delicious selection of food and drinks in idyllic surroundings.

Monbijou-park – Great Potential For Leisure In A Small Space

The popular Monbijou Park is also situated in Berlin-Mitte, but is much smaller than the Tiergarten. Located just across from Museum Island, you can barbecue, play sports or visit the special outdoor children’s swimming pool with your kids. The name of the park is French and means “my jewel”. This refers to the magnificent little rococo castle of the Prussian queen, which once formed the centre of the park. After her death, the park took over various other functions. Among other things, it served Friedrich Wilhelm II as a summer residence and served as a Hohenzollern-era museum. Unfortunately, the castle was completely destroyed during the Second World War.

The Monbijou Park then became a real amusement park. By the 1960s, various leisure spots were created, including a children’s swimming pool, numerous fountains and a few sport areas. The promenade, which was added in 2007, guides you on a relaxing stroll. You can also do a workout at any time in the Freeletics Outdoor Training Parkour area, built in 2017.

Park Am Gleisdreieck – Interaction And Innovation

The park at the Gleisdreieck in Berlin’s Kreuzberg district is still a relatively new recreation area. It was created as a result of a citizens’ initiative, which addressed the long-abandoned railway area and created a unique retreat with the support of the city. The park, which was completed in 2013, makes use of old railway and signal facilities to create a very special atmosphere. Great importance was attached to preserving the so-called Ruderalflora, i.e. the uncontrolled vegetation that had formed between the old railway facilities. For this unusual design, the park at the Gleisdreieck was awarded the German Landscape Architecture Prize in 2015.

During your visit you shouldn’t miss the nearby intercultural rose garden. The project is run by various neighbourhood communities and invites people from all over the world to garden in the middle of the city and to engage in conversation. The B-Part Am Gleisdreieck, which borders directly on the park, is also very good for networking. On an area of around 1,000 square metres, the multifunctional building offers not only coworking places, but also a public café, art exhibitions and sports facilities. Here you can try out new forms of work with other creative people. And during lunch break or after work, you can return to the park to play a game of table tennis or enjoy an open-air yoga session. 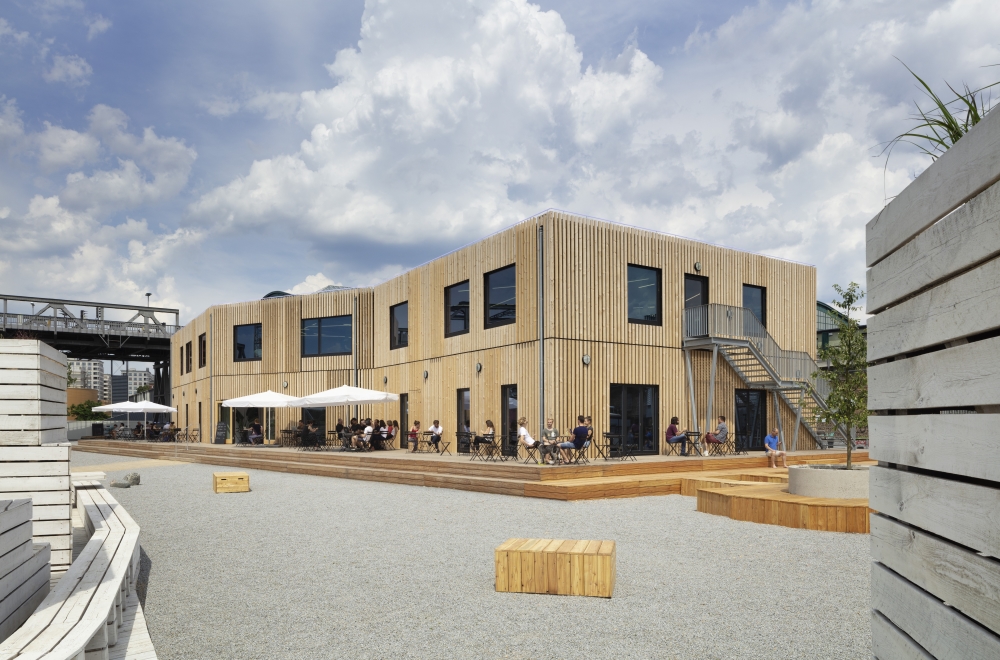 If you would like to relax outside Berlin-Mitte, you should pay a visit to Tempelhofer Feld. Although it was home to parades and drills for a long time, and later the location for Tempelhof Airport, the 386-hectare site now serves as a true community space. The space available is incredible. Skateboarders, inline skaters and cyclists can now let off steam on the wonderfully smooth runways of the former airport. Four-legged friends also get their money’s worth here. The fenced, four hectares large dog park is perfect for playing and meeting new friends. There is also a two and a half hectare barbecue area and a huge picnic space.

In the community gardens, neighbours and anyone else interested can grow their own vegetables in specially-created plant beds. For visitors interested in history, the Tempelhofer Feld features an information trail with 20 memorials and historical sites that bring the eventful history of the area, from Prussian times to the infamous Airlift, back to life. A visit to the now disused airport building is also extremely worthwhile. During the two-hour tour, experts will fill you in on all of the most interesting facts about the 300,000 square metre building.

With its beautiful parks and recreational areas, Berlin creates an antidote to the often fast-paced and exciting city life. Thus, the residents of the capital can always find peace and relaxation in the city centre. For residents of GLINT, this is even easier: the beautifully overgrown inner courtyard is ideal for you to read the newspaper, drink coffee and relax. The open design creates a feeling of light and space. The result is a green retreat in the middle of your own home.

Would you like to find out more about the recreational and leisure options in the neighbourhood around GLINT? Then download our free guide “Living in Berlin-Mitte” now.